I met James outside work, he was late so I sat on the wall reading My Booky Wook 2, which makes me feel very far removed from Russell Brand’s world of sex, Hollywood and more sex. (I have eclectic taste in literature and Russell makes me laugh – fact).  I watched the kids in their school uniforms pile into tuk tuks giggling together, white blouses tucked into A-line navy skirts and gloriously white plimsoles, then a heavy built boy in a beige Boy Scout school uniform jumped off  the wall and landed in front of me with a thud, and I swore to God it must be kicking out time at Wes Anderson’s school of style. 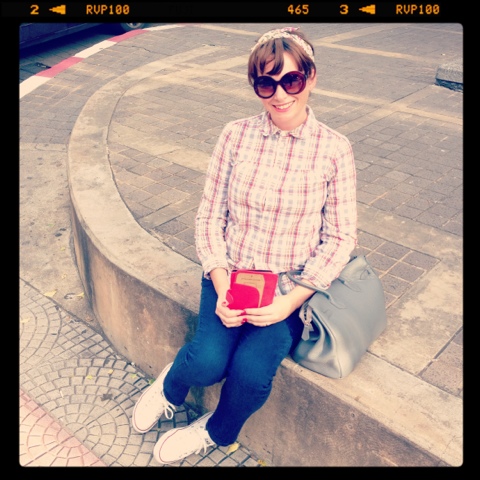 I’ve never been to the Khao San Road. I’d seen it on YouTube before we moved here, in the name of research, and I’d seen it in that scene off the film ‘The Beach’ where Leonardo DiCaprio arrives and its all a bit fast and furious on the streets of Bangkok before he goes mental with a bunch of hippies on an Island. It didn’t look like anywhere I’d want to go, but when in Rome…. I imagine this is the street people pictured when we told them we were moving to Bangkok, which explains the smiles on their faces and the contradictory/puzzled shaking of their heads.

Its a short street, the Khao San Road, lined with stalls to buy allsorts of shit from what I’d describe as  ‘ethnic pantaloon’ to flip flops, bangles, and henna tattoos. Nothing I’m really interested in buying just now. We walked the length of the street in 10 minutes, declining offers to have suits made or buy what looked more like Peruvian hats than anything Thai I’ve seen so far. For some reason the Peruvian/traditional Thai(?) ladies want us to buy wooden frogs with sticks, so that when we’re back in Levenshulme we can turn the heating on and switch the lights off and pretend we’re back in the tropics surrounded by toads.

We decided the best thing to do would be sit down and watch the world go by – i.e. stare at people who are different from us and comment about it behind our beers. So we did just that, like the ‘diet starting tomorrow’, so too is our Buddhism. I’m more observant than James when it comes to people watching, I hear snippets of conversations and peice puzzles together, I have a scooby sense when things are about to kick off, or when couples are about to fall in love. James can spot a good light for a photo so he takes pictures while I observe and I like to think the two narratives work well together. We point things out to one another – mostly the absurd.

The bar we chose to gawp at the world was a perfect spot, there was almost too much to see. It was people watching porn. Opposite me a tattoo’d man in his early 20’s sat alone, scoffing chips and a floppy toasty, he startled me when he spotted his friend and shouted his name. A tall, tanned, daft looking kid approached and squealed with delight upon seeing his friend. They hugged and slapped each other, seemed delighted at their reunion, I told James it made me want to weep. The daft kid sat and instantly tucked into the other’s chips and I thought, ‘gosh, he hasn’t eaten for a while’. They talked in a language unfamiliar to me, maybe Dutch? I was intrigued by them, had they back-packed together? Were they lovers? Were they drug buddies? Its none of my friggin’ business, but that’s the beauty of people-watching – it’s whatever you want it to be. 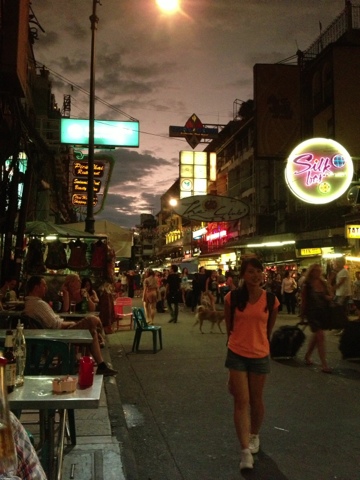 It was getting dark, the activity was warming up, lines of back-packers were being taken round the corner of our bar. I like to think to a top-notch hostel as none of them seemed to come back, and James said the kitchens for where we were seated was round the back. Gulp! I watched a tall European man being arrested and escorted down the road by a policeman, he stood tall, but his eyes gave him away. Christ, the thought of being arrested over here. Instantly james and I decide it must be drug related and pitied the fool now on his way to his life (meaning life) sentence. Perhaps I’ll pursue the idea of visiting Brits banged up, take in some cigs and a magazine. I imagined that was where Bangkok life would bring me at some point, Bangkok Hilton.

A pair of Japanese ladies pass by, they are the first people I’ve seen to make Elephant-print baggy pants look cool, and they’re the only dudes not to be carrying rucksacks in favour of suitcases on wheels. I tell James I doubt I’ll carry a ruck-sack again and then we discuss why we never ever back-packed in our youth. The truth is it didn’t ever seem to be an option. When we were 18 we don’t remember anyone saying – ‘hey, instead of going to Uni/straight into a job, why don’t you take a fucking gap year and see the world?’ It wasn’t happening in the Wirral, not in my peer group, and it wasn’t an option 4 years earlier in James’s post A-Level peer group. Plus we were always skint and holidays for me in my university days meant going to Glastonbury. For James, the thought of getting a job to pay for it was the deterrent. The kids I met at university who’d travelled were all posh, or you know, spoke like the royals and had a bit of cash.

A squat Peter Andre chap on the plastic table next to us asks his Thai accompaniment whether she thinks he should get a tattoo. I can’t hear her answer through the cloud of sincerity he’s creating, they’ve clearly known each other 5 minutes. I hope she suggests having her face tattoo’d on him, I love a shit portrait tattoo.

A Thai kid in the street wearing an Argentinian footy shirt, about 6 years old, looks like he knows a trick or two. I wonder what Abe would be like if this was his norm, working on this street with his family, and I decide we’ll return with the kids. I might have to put them on leads, I think ‘reigns’ is the correct term.A woman with a blue tray full of scewered shiny black scorpions gestures for us to indulge and we “my ka/my krap” the same way we do when the dude encourages us to buy one of his giant dictionary sized zippo lighters. Surely they’re for those people who juggle fire on the beach to a bunch of gurning on-lookers, who claim “this is awesome”. I only feel offended by the woman who thinks I’d want to buy a friendship band with ‘Wolf Pack’ written on, and forget my manners and say “no thanks” instead of “my ka, korp kun ka”. ‘Wolf Pack’ FFS!I wasn’t that impressed by the Khao San Road at first, it was way smaller and less edgy than I’d imagined. But then the sun went down and the streets darkened and the street became alive. A grown man stood lobbing a neon glow-in-the-dark-insect-thing high up in the air – similar to the men who stand on Market Street in Manchester flogging things that whistle shit bird-like sounds. James and I talk over the revs of the 3-wheeler motorbike – ice – delivery guy, he’s pimped his ride. I don’t know what this vehicle is but it drips water onto the dry road wherever it stops, at least we hope its water, if its petrol with these giant zippos everywhere, this may be our last moment together.

A young lad turns up to practice his ‘keepy-uppy’ skills outside the bar opposite. James points him out to me. I ask him if he wants to get a photo, he’s messing about with my new snidey Ray Bans ’cause they’re a “good filter, these” for photos. I ask James – “do you want to take a photo of the kid with the tricks?” Its a negative, apparently the number one in the world keepy-uppy trickster is a regular at Huddersfield Town games and James is far from impressed.

The reunited friends depart – one lad sets off, leaving his Leonardo DiCaprio tanned, vested friend behind. I think he’s off his mash, the Leo one. He starts singing along with the bar music – Jack Johnson type vagueness, he downs a bottle of Chang, lights a cig before pursuing the man who left him. For a second I wish I was off my mash on the Khao San Road, about to embark on an adventure, but I am mid-adventure and a bit boozy, and my adventuring is a bit more ‘reponsible?’ You can tell there are opportunities to find chemical enhancers here though James and I aren’t offered any such thing. James is in his office attire, cool and Kerouak-like, I’m dressed a bit too Roman Holiday to get away with being a backpacker/party animal, plus I look like a geek writing in my notepad. “You two are different” one man observes. ‘Thanks’ I think, then he tries to flog us a suit. We’re not different, we’re just the same, but a bit older.

There’s a touch of the Morvern Callar of a girl who’s wandered past us twice now. She’s layered herself in ethnic print. I’m not sure she’s comfortable in this heat. She wanders passed twice with the same concerned facial expression, but second time she’s changed her hair. Because she looks naiive and alone I picture her as having rare Kung Fu/Ninja skills, else, I’d probably bring her home and make her eat stew. I feel the same way about the young men who pass me wearing what looks to be their pyjama bottoms – its a bit Peter Pan.

I’m drawn to the Germaine Greer-alike who makes eye contact with me as she passes, eating her Cornetto. We give each other a smile, its like the ‘celebrity nod’ when Noel Gallagher sees one of The Proclaimers in the pub (I’m sure its happened). It says, we own this moment, we’re passing through and we probably don’t belong here. I suspect everyone is passing through, the trustafarian in bare feet and a blanket, the tanned face with gleeming white teeth, the girls in teeny hotpants on bums big and small.
“James, are we too old to go back-packing”, James picks up a French Fry, “Yeah”. I don’t  know that we are, but right now, we are living where people tend to  pass through, and its fine. “You know what I don’t like?” He says, I wait for his answer – “those socks that make you look like you haven’t got any socks on”. Bewildered by his randomness I look up at the smiling face in front of me. “No thanks, I still don’t fancy a scorpion”.