Question: How helpful has it been for me to read that all of the following may have been symptoms of CULTURE SHOCK?Moody melancholia, a desire to run for the hills flicking the Vs at the world behind me, weeping at a song that teaches my kids the alphabet, remembering with fondness my indie days, cringingly recalling my rave days, frantically checking Facebook status updates and Twitter posts – making sure I’m not missing out on anything, remembering with rose-tinted specs my house-shares in my 20s, swinging from mood to mood like a monkey on a chandelier, reminiscing times before the responsibility of kids – my kidulthood.

Answer: Well pretty damn helpful really.
I read about the stages of culture shock thanks to an email from Rebecca my stoic, loyal, hilarious, intrepid and trusted comrade since our teens. And I am relieved to read that like with grief, I’m going through a process so there appears to be some ‘normal’ in what feels like my ‘crazy’.
In a nutshell there are 4 stages of Culture Shock: Wonder, Frustration, Depression and Acceptance
I can write about this now because I feel I am emerging for the first time and accepting Bangkok as my new psychedelic home. I am surrendered to it, but in a good way, like a willing 50 Shades of Grey way. I’ve thrown myself into my new life and brusied myself from the fall. I’ve been entirely self-critical throughout – ‘I’m not parenting well enough here, I’m not supporting us financially for the first time ever, I’m failing to mix, I don’t think anyone ‘likes’ me’ – but now, I appear to be winning.
When we arrived I thought ‘I’m going to take this opportunity and on behalf of everyone who’s never been given this chance, I’m going to embrace it and become the best goddamn expat/stay at home parent/other Bangkok has EVER seen’. I blame my love of the sport movie genre and a slight addiction to inspirational quotes (watch me) for setting off at the pace I did. Mohammad Ali famously said “If I were a garbage man, I’d be the word’s greatest garbage man”. I over-apply this principle and soon run out of energy. I tried to be ‘the best’ in my first month, during my ‘Wonder Stage’, and the wonder stage was gooood, if a little frantic. Like the start of a new relationship where each other’s flaws are ‘so cute’. “James, look at the size of this apple, its huge, take a picture of me holding it”, “waaaaah look at that ‘stand up for a monk’ sign on the train”,”OMG I just had the best massage ever”, “lets eat Pad Thai everyday then go out and get matching tattoos” (we haven’t…yet). The wonder stage was ‘wonderful’ for our enthusiasm knew no bounds, and Bangkok is brilliant for all its intensity.
I don’t want to go on about the Depression stage, because it hit me hard and I’m worried writing about it might conjure it again. I’m not the type of person who says “Candyman” in the mirror several times just incase. However, lets just say I’ve been pretty low at times and its felt debilitating. Were it not for the support of James and my mates back home willing me on like an over competitive mum on Sport’s Day, and my new mates sharing the roller coaster emotions and laughing in the face of culture shock, then maybe I’d still be feeling that way. I dread to think.
So what changed and why am I feeling ok? How – dare I say – am I feeling good? Well, it hasn’t been by madly rushing to experience as much as I can in a short time, attempting to get to grips with everything as fast as I can, because this has left me feeling panicked, and more alienated. I must have looked like the cockroach that ran into my massage room and quickly scuttled in different directions til it found a hiding place (least relaxing massage ever). I think I’ve accepted that in a way I am the office ‘new girl’, and only time and the arrival of a newer girl will change that. There isn’t an Alice in Wonderland remedy, although you might be able to buy one in Nana in the stall next to the dildos and viagra. The change has come with a bit of being kind to myself, seeing culture shock for what it is – a fucking shock to the system.
The shock isn’t so easy to recognise through symbols, of course its differences in language and culture and climate, but its not so easy to read when you’re ‘in it’. It seems to steadily build, and it appears to be a continuum so who knows if I’ll sink again, and I’m sure I will. For me the shock hasn’t been the fact that frozen crocodile is cheaper than most cheeses in the Big C, or that the supermarket shelves are packed with skin-whitening lotions while I’m hoping for a bit of a bronzey, nor is it that the woman at the til is often a ladyboy, because that just adds difference to my usual shopping trip and I love that ladyboys have ‘real jobs’ not just involvement with an exploitative sex industry, and as for the food  – people at home, you were right, it is divine.
Here I am a “farang”, a person of European ancestry. I am Jenny foreigner, but a foreigner is just a person from a different place, right? It gets ‘Frustrating’ at times, and this is another stage, which can manifest in ANGER. I can be in an empty cafe with 8 employees behind the counter and still wait 30 minutes for my drink. I can be clearly trying to cross a busy street at a crossing with my kids and noone stops for me (zebra crossings are aesthetic not functional),  Patti can show signs to Thai people that she doesn’t want them to touch her face, and still they touch her face and get upset when she growls and tries to bite them. The Chupa Chup lollies I buy to rot my kids teeth while pacifying them are impossible to open, the sky train terminals crash closed too soon and bruise my thighs. Darling, the condensation dripping from my martini cocktail is marking my silk blouson. Grrrr, you’re damn right I’m angry <does angry monkey face>. Although this said, such is the vibe in Bangkok, I can’t get angry about these things, everyone seems so passive – I’m hoping it will rub off. 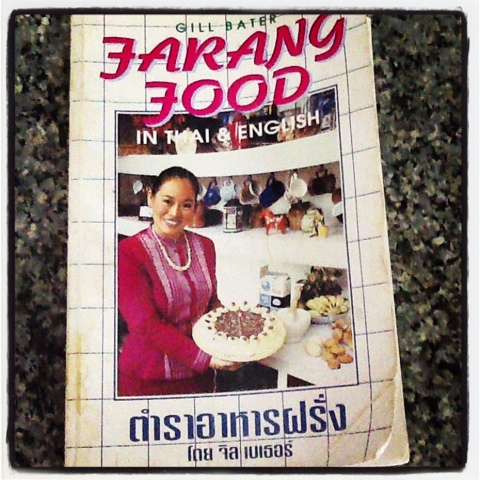 Back to my question of why am I feeling ok nowadays? Well, a combination of things, the first being the love of my family. Secondly, I’ve returned to yoga – we’ve had a passive on/off relationship for 15 years. I found a really amazing place where on entering reception I feel instantly calmer, and although my first class was in Thai and I did the relaxation part with one eye open so as not to make a show of myself, you know, while everyone’s doing downward facing dog, and I, as class “farang” am lying down. I actually managed to enjoy the class and not let Polly out of prison during any of the poses (Air high fives self). Thirdly, I’ve learnt a bit of Thai. I was able to have a conversation with a taxi driver whereby I expressed how difficult I was finding it to tell the time in Thai. The number one – “neung” is used for both one o’clock and seven o’clock depending on what other word you use with it. I know, its hard to explain, but I think he knew what this crazy half-pissed farang was on about. Learning the language eases the culture shock, its obvious really.
Then there are other things I’m finding helpful, like talking to Wandi about her family. This weekend is special for her as a new Buddha arrives at her temple, and hopefully one of these days I’ll go and see where Wandi lives <pearl clutching time again>. I’m watching the odd Thai TV Drama (I may one day love it like I loved Prisoner Cell Block H (i.e. for its shitness). In the last Thai soap I watched I’m convinced the murderer was played by ‘himself”.I’m taking it a little steadier, I’ve looked within myself (and on this occasion I don’t mean exploring my vulva with a vanity mirror) I mean looking at me like a kind person would, like a Buddhist might, or a person on a purple ohm at the stone circle at Glastonbury, and generally sloooooooowwwwwwinnnnngggg dooooowwwwwwnnnnnnnn.What’s the point of having amazing views if you don’t stop to look at them?
So, I’ve kind of worked out that everything I need is here. I doubt I’ll ever feel entirely at home here, but I can start to enjoy the differences. There will be times when my foreignness feels glaringly obvious (like standing for the King’s National anthem at the cinema before the film and feeling like a  divvy).  As for my mood swings, let them swing, I am that chandelier riding monkey. I decided early on in my blog I’d measure my happiness by whether I’d bought a Fray Bentos pie and some of you may be interested to know I haven’t yet. If I act a little crazy, or if I upset anyone, I am sorry, but Culture Shock is going to be my excuse for everything  these days.