It is the ridiculousness of a walk home that has inspired this post. My farewell to Mr James, who has  accompanied me with his camera on my Bangkok adventures and daily struggles. A chapter has ended and a new one will begin. I have turned a corner – literally and metaphorically, and entered the next phase of the ‘culture shock process’. 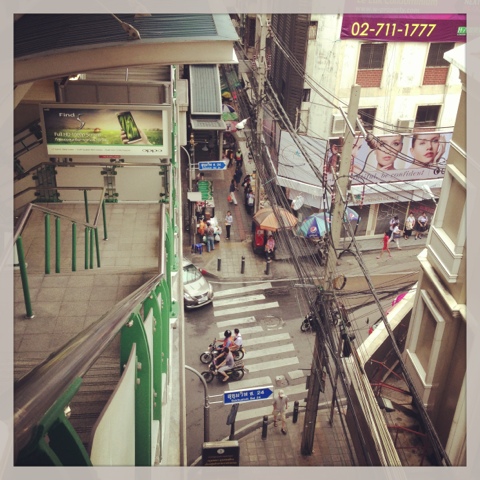 Mr James, my cameraman/director/therapist/friend, not necessarily in that order, has returned to his loving family, his Jammy Patch and their gain is our loss, but a happy one, ‘a bientot’, ‘so long’, ‘we’ll meet again’. Oh God, if I start singing Vera Lynn songs on the way home from ‘women-drink-for-free’ nights, by all means mow me down with a tuk tuk.

We had a farewell drink in a little bar at the corner of the street, where you can choose the tunes from Youtube, and if you’re a male not interested in ‘company’ you’re left alone, otherwise there are gyrating possibilities of the gangsta rap video – ilk. After a couple of beers, a summary of our journeys and the making of the show, and a few belly laughs with Billy – another contributor to Brits in Bangkok and ace cheeky cockney company – I exchange my farewell letter for the contents of Mr J’s fridge – he had to go home, man cannot live by peanut butter and tea alone.

I did well not to cry (too much) though Uma, Mr James’s fixer and super cool, gorgeous Thai font of knowledge was shocked at my tears. She’s only met me a few times, once at an HIV/AIDS temple and I wept there too. On this occasion I was crying at yet another goodbye. I’m sure soon I’ll be a pro at goodbyes, hardened by the frequency of goodbye hugs. I felt a bit like I’d had my stabilisers taken off my bike, and Mr James having given me a good push-start has let go, and I’m on my own again, pedalling like mad, excited about the ride ahead but scared of falling off my bike and scuffing my chin.

I cried for a whole street, the rain mingling with my tears, not like Andy McDowall in 4 Weddings “Is it raining? I hadn’t noticed”…piss off…but more Julian Lennon, “Salt Water Wells in my eyes”. I am laughing at my dated uncool references. It rained, I got wet. I don’t have an umbrella, I just lose them, even the one I ‘accidentally’  stole from Habitat when pregnant with Patti (I still feel responsible for their going into liquidation). But I had a sudden realisation, a moment of clarity, because things have started getting easier for me you see. I’m not shouting at the kids anywhere near as much, we’re having daily laughs and park adventures, they seem to want to dance with me (although I was a tad disappointed that the kid’s reaction to Inner City Life played on the boom box during a recent storm didn’t get a better response than “turn it off mum, its too loud”). I’m excited about being here, I’m doing yoga (in Thai), I’m contemplating joining in with the nightly aerobics in the park (its 20p!) and I have a bunch of new mates that seem totally cool.

The filming came to a natural and positive ending and I didn’t weep in my final interview, though I’ll probably weep with embarrassment if I ever watch it (I’m toying with the idea of never seeing it. Someone once said to me that the meaning of life was planting a tree and never seeing it grow, but just to bastardise one guru’s enlightened quote, my interpretation is ‘make a documentary for channel 5 and never see it shown).

Back to my walk home and turning my frown upside down – I felt free. I had a moment. I could see clearly. A piano could’ve fallen from the sky behind me and I wouldn’t have turned to see it.  I walked forwards,  past a ladyboy wearing an ill-fitting peach twin-set; perfect make-up. I passed a row of motor-cycle taxi drivers with carrier bags on their heads chowing down on street food, seated on low plastic chairs, the kind you get on the street outside pound-shops in Manchester. I passed a woman having her photograph taken on the steps of a shopping mall, posing with the illuminated design in the window whilst getting drenched. I passed the sign on the building site reading “You Dream it we Build it” (they’ve obviously never shared my Stephen King style nightmares). I started thinking about how rich life is for its mix, its randomness, its colour and craziness, about how if you’re open to the universe anything can happen. In my life I’ve met some amazing people, fallen in love with friends while seeing the world, I’m a lucky bitch, I really am (onus on ‘lucky’ not ‘bitch’).

Our last day of filming was spent at The Golden Mount, other filming has occurred which I haven’t written about, but I don’t know whether I can blog about it, or whether I need to wait until I can make good of it first. I have visited a remote women’s refuge and an HIV/AIDS temple to find my place in the world, where I can give back to my new society, but I don’t know what my role will be. I’ve had company with this soul search, and I’ve seen things and met people I never would had I not been filming for telly. I talked to a Thai woman at the refuge, she studied in Stockport where I’ve worked for years at several refuges. Random brilliance! I met a ladyboy called Nan, and chatted about his life, in a gazebo amongst the trees. These memories are preserved in my mind and I hope to share more of them and write write write. 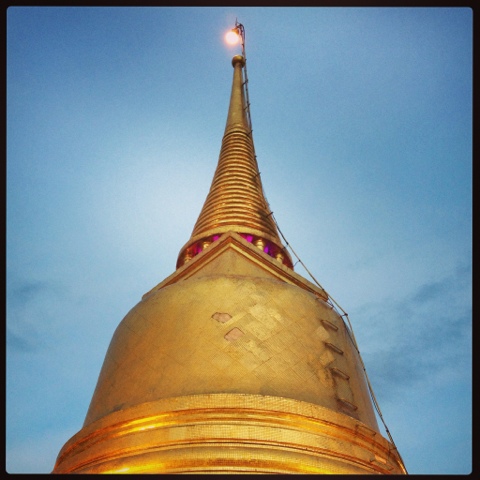 At the Golden Mount we met our new mates on the roof where a whopping great golden bell sits cordoned off by rope, which Patti and Abe saw as a challenge and clambered over, getting told off by a monk – not everyone can say they’ve been told off by a monk can they? You see, I knew we needed to give them life-experience, though that wasn’t quite what I had in mind. We met our mates and their kids and we shared the moment. And, so that Mr James could get a few shots of the city for telly, we were allowed to be up there for a bit on our own. We had access to gongs, to wind chimes, to the view of the city, to the expanding cloudy sky, to the end of the day, to the peace to be had at the top of a mount. I could’ve had a proper moment there, and I think I’ll return to take that moment because with Patti and Abe breaking the rules, it kind of harshed my mellow. Though that moment, I wouldn’t have wanted any other way. 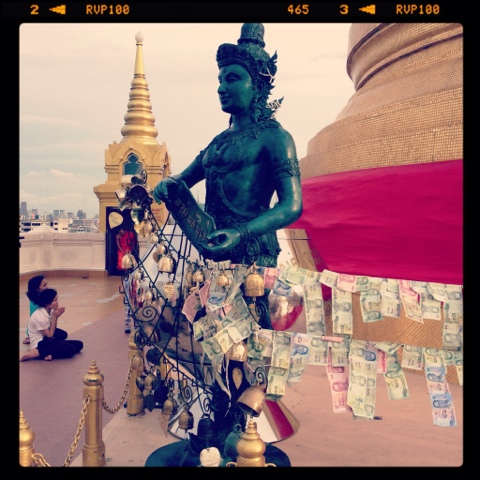 I meant what I said though, on camera, I feel hopeful, and I hope I’m not narrated as some moaning ‘trailing spouse’ (I can’t even believe that term still exists). I’ve taken a gamble, seized an opportunity in moving here and in contributing towards the film. The final cut is out of my hands but its been a blast, and without it my time here may have provided me with the space to contemplate my new life. I’ve seen so much beauty in such a short time, felt the power of people, the power of love, the power of the universe. I’ll be taking more walks in the rain if they’re this evocative.

It’s going to be hard not to let this experience turn me into an urban hippyy! Now where’s my conch shell, I want to get some practice in before yoga – oooohhhhhhhmmmmmmmm(mygodmyidentitysearchcontinues).